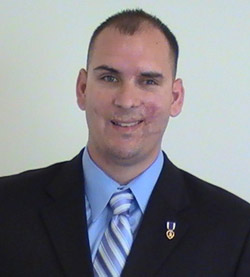 “VR&E is a tool to assist in that transition, so use it.”

Mark Wise was a student at the Air Force Academy in Colorado Springs, but joined the Army after graduating because, he said, “I wanted to be on the ground and lead combat troops.” After spending time at Fort Carson in Colorado Springs and Fort Benning in Georgia, he was deployed to Afghanistan for five months. That’s where he was severely injured in an IED blast.

The injuries Wise sustained are many; the blast also led him to Veteran Readiness and Employment (VR&E)

Wise was hospitalized in bed for more than two months, then spent two more months learning how to walk again. He lost most of the vision in his left eye, part of his forearm, and tissue on his left shoulder and left quad. His left knee was shattered and the right kneecap was fractured. Nerve damage to his shoulder made lifting his arm impossible; his right hand required surgery. His face is scarred.

“Initially, that’s pretty devastating,” Wise said. But he was looking ahead, and for him, school became a means to transition back into ordinary life.

After opting for discharge, Wise asked VA about benefits to continue his education.

“I didn’t know how I was going to pay for school, though, so someone introduced me to VR&E,” he said.

Although the program is designed for Veterans, Wise was able to take advantage of a program feature that allowed him to access VR&E services while still on active duty. He met the minimum disability requirement and was approved.

Once he learned about VR&E, he completed the application and talked to his counselor about options. He was interested in international relations and wanted to earn a Master of Business Administration with an international focus. Although Georgetown University is an expensive school, Wise made the case for his choice—Georgetown has one of the top five international MBA programs in the country—and VR&E covered the cost of tuition, books, and additional academic expenses.

When Wise began his master’s degree, he had just started walking again.

“I just wanted to do something to get away from military, improve myself and move around again,” Wise said. He learned how to adjust: reading and typing were difficult, but now, he says, he is fully functioning and sees no limitations, referring only to “the obvious physical appearance stuff.”

Wise said it’s important for other Veterans to identify and think through what they want to do next.

“VR&E is a tool to assist in that transition, so use it,” he said.

With his MBA from Georgetown University, Wise is living in Colorado Springs looking for work, perhaps as a consultant.

“VR&E allows you the opportunity to point to some certification or training. You can say ‘now look at me as the whole picture rather than trying to cancel me out because I elected to do something different with the first five years [after my undergraduate degree].’” Wise says he won’t settle until he finds the perfect job for him.