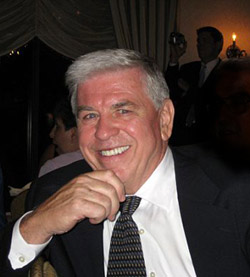 “VA put me in a good direction.”

Like many Veterans who came back from the Vietnam War, Bill Dooling struggled on his return. He had joined the Army at 23 after one year as a middle school social studies teacher. With brothers in the military it seemed like the right choice. What Dooling didn’t realize was how hard life would be after his service was over.

Dooling was stationed at Fort Myer in Arlington, Va., but in June 1968, he was deployed to work as an intelligence analyst in Vietnam for one year. He was already susceptible to flare-ups of colitis, an inflammation of the colon, and Vietnam’s harsh conditions made it worse. After a stint at Fort Benning in Georgia, he was to return to Vietnam, but doctors said the tropical area would be bad for his health. He retired from the Army in 1971 at age 28.

After his discharge, Dooling tried to cope with ongoing health challenges, the death of his father, and a growing sense of anger and anxiety.

That’s when Dooling met the man who eventually became his counselor through VA’s Vocational Rehabilitation and Employment (VocRehab) program.

“He put me in the pipeline to get back into teaching,” Dooling said. It wasn’t only the professional assistance that made a difference: Dooling and his counselor, a World War II Veteran, had an instant connection.

“When I got out of the Army, I had a bad attitude” he said. But Dooling trusted his counselor’s judgment and advice and that helped him get a better outlook on life.

That counselor’s support—and financial backing that covered tuition and books—helped Dooling graduate from Northeastern University with a master’s degree in political science.

“I am indebted to that guy. He changed my life,” Dooling said. “I was more interested in the present. I wasn’t thinking pragmatically about the future.”

With VocRehab’s help, Dooling continued his education and earned qualifications that enabled him to teach subjects he would not otherwise have been able to, and advance his career in education. This help, he said, “essentially saved my life. I had a great life.”

Retired since 2002 after 30 years in the classroom, Dooling now devotes his time to politics and helping other Veterans through service in various organizations.

“VA put me in a good direction,” he said.