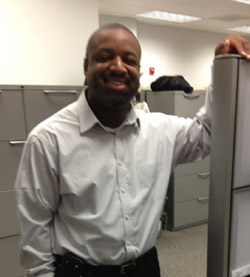 “VR&E has changed my life in the sense that it has taught me about the different services and rights I have as a wounded warrior or disabled Veteran.”

Lawrence Young first enlisted in the military in 1997. After a short stint in the Army, he worked in customer service and sales as an account manager at Staples, rising through the ranks and enjoying increasing responsibility. When the economy slowed and Young found himself struggling to make ends meet, he decided to go back to the Army, in February 2009.

Young chose an occupation he was familiar with, supplying fuel and chemicals to his unit as a 92 Fox. Soon after Young started the physically demanding job, a back injury prevented him from continuing. His physicians were unable to determine the exact cause of the problem and ultimately decided that the best choice for his health would be to discontinue service.

It was in the months after he left the Army and began pursuing an internship with Homeland Security that VR&E gave his plans and career a boost.

After attending a Disabled Transition Assistance Program and hearing a Vocational Rehabilitation Counselor speak at that DTAP session, Young realized that his prospects could be even greater—he could aim higher—if he took advantage of what Veterans Affairs offers.

Young soon began the VR&E process, attending an initial meeting and going through the evaluation. The counselor gave him a lot of information about the program, and they discussed his education and employment goals.

Today, Young is a business student with a concentration in human resources at Northern Virginia Community College. Through VR&E, Young has used his VR&E benefits to pay for school, books, and other resources. Young believes this to be the greatest tool VR&E has given him—an education. He plans to continue on to law school in hopes of working in a corporate law practice, and is on track to complete his schooling in six years.

“VR&E has changed my life in the sense that it has taught me about the different services and rights I have as a wounded warrior or disabled Veteran,” he said. “If I hadn’t found out about VR&E, I would be stuck in a dead-end job wishing I had better resources to allow me to excel.”

Young credits his counselor with providing him the information and tools that have helped him advance his career. He looks forward to the day he can turn to his counselor to say, “We finally made it!”

Young’s advice to other Veterans: Call VR&E; go to a briefing; do whatever it takes to at least find out the possibilities VR&E offers.

“If you need anything, you can call your counselor—even if you think it’s outside the scope of the program. My counselor has always come through for me, either by providing me with what I need or telling me where I can get it,” Young said.