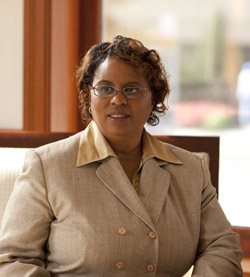 “Having a good counselor to reach out to occasionally, especially after they know you’re struggling … and say ‘How are you doing?’ It’s a good thing.”

When the recession hit in the 1970s, Joyce Gammelmo knew she needed a plan, so in 1979, she joined the Air Force with the hope of training to become a nurse. That plan changed during her service, when Gammelmo was injured—although not in direct combat.

“My injuries came from supporting the military in different ways,” she said, and included complications from overseas deployments where she was exposed to chemicals. Thyroid imbalances, a paralyzed vocal cord, and constant headaches are only some of the ways her health was affected.

Because her injuries weren’t physically visible, she struggled with other people’s misperceptions about the extent of her disability. Despite that, for years, Gammelmo prospered with a “nobody is going to hold me back” attitude, which earned her a job immediately after her separation from the military. Discouragement did not come until many years later, during the economic downturn of 2009, when the freelance business she had started began to falter. She was forced to sell her house and accept a difficult, commission-based sales job.

It was during this time that a call from Vocational Rehabilitation and Employment (VocRehab) services “changed everything 100-fold,” as Gammelmo puts it, giving her momentum in both education and employment.

To the outside world, she had not appeared to be struggling.

“Everyone told me I was doing just fine and had had all these great experiences, but internally I knew it wasn’t so. Sometimes the Veterans who don’t look like they need any help need the most help,” she said.

With the assistance of her VocRehab counselor, Gammelmo mapped out a plan to go back to school. They discussed how her physical limitations might affect her career plans, but “what [my counselor] always told me is that I never let anything stop me, which is true. Having a good counselor to reach out to occasionally, especially after they know you’re struggling … and say ‘How are you doing?’ It’s a good thing.”

In addition, Gammelmo met a director at VA who happened to be looking for an intern. Gammelmo was offered the position and, after proving herself, she was hired as a full-time employee in December 2011. And Gammelmo will finish her master’s degree in administrative justice and security in July.

For other Veterans who leave the military with health problems, Gammelmo wants them to understand the importance of taking the initiative.

“Don’t be afraid to let somebody know you need help,” she said. “And don’t get discouraged by nonpaid work experiences. ... In the end, what you’re doing is showing your capabilities.”

No two Veterans share the same story. But Gammelmo hopes her story will inspire other injured Veterans to push themselves to succeed.

“The future is wide-open for me. ... I am a hard worker. I learn quickly,” Gammelmo said. “I have established myself as a go-to person. My future is really bright … I am well on my way.”