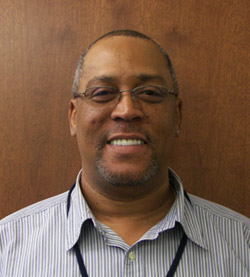 “If it wasn’t for my counselor, I would probably not be where I am now. He was a big influence and encouraged me every step of the way to complete what I started.”

Kenny Ringgold’s service began in 1977 when he joined the Army Reserve in Baltimore. Two years later, he decided to enlist full time. Ringgold spent some time stationed throughout the United States before being deployed to Korea then finally Germany.

During training exercises in Germany, Ringgold injured his hip; what started as moderate pain became progressively worse. He was soon sent to a bone specialist in Frankfurt, where an MRI showed a fracture and dead, deteriorating bone. Crutches in hand, Ringgold was flown back to Walter Reed Army Medical Center, where he eventually underwent hip replacement surgery.

Shortly after that, VR&E came calling.

He could have returned to Germany, but Ringgold took an early discharge, because, as he says, “You can’t be a soldier with a broken hip.” But VR&E made it clear that he still had lots of options.

Ringgold’s Vocational Rehabilitation Counselor encouraged him to aim for college or vocational school. Despite having dropped out of high school, Ringgold had always wanted a college degree, so he decided to enroll at Baltimore City Community College. Ringgold recently received a bachelor’s degree in applied information technology. He is proud to be the first member of his family to earn a college degree.

His choice to major in information technology was based both on his interest in computers and the physical limitations caused by his injury.

“VR&E played a complete role in my education. Everything they did was very instrumental in me accomplishing my educational goal,” Ringgold said. And it wasn’t easy: The first two years were especially hard because he had to take refresher courses in math and English. When he reinjured his hip, he stopped going to school for a number of years—but his VR&E counselor stayed in touch, encouraging him to get work experience and pursue on-the-job training opportunities until he went back to school.

Ringgold said, “They kept in contact with me throughout the whole process. If I had any problems, I was told to see them. If I struggled with a class, they asked how they could help—like supply a tutor or whatever I needed—and they did that. And if you feel like you’re not going to make it, they give you encouragement and good advice.

“If it wasn’t for my counselor, I would probably not be where I am now. He was a big influence and encouraged me every step of the way to complete what I started.”

In 2004, Ringgold started working at the Department of Veterans Affairs through a work-study program, and after several promotions is now a computer specialist in the IT department.

“My advice for other Veterans with service-connected disabilities: Ask VA what benefits are available to you and take full advantage of them. The Department of Veterans Affairs, and particularly VR&E, were life-changing experiences,” Ringgold said. “A disability doesn’t mean your life is over.”