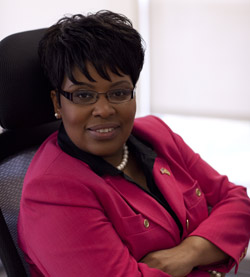 “Once you get that help, it can elevate you to the next level.”

For four years, beginning at age 18, Ginger Miller drove 17-foot cabin boats for the Navy in Maryland and North Carolina. But a car accident in 1990—in which her car flipped three times—sent the 20-year-old Miller to the hospital for 21 days. A year later, a boating accident on the job reinjured her back and left her with a cracked rib, a concussion, and knee complications. After a medical discharge the following year, Miller moved to New York with her husband, but when his job fell through, they were left homeless.

She said, "When your family gets to the point where they tell you to find somewhere to go, but you have no place to go, what do you do?" Miller knew what her next step had to be: She put in her claim with VA in 1993.

After receiving a 60 percent disability rating, Miller applied for the Veteran Readiness and Employment (VR&E) program. At her first meeting with a counselor, she took an aptitude test, discussed career tracks, and decided to enroll at Nassau Community College. The process, she said, "was easy. It wasn't full of red tape."

In the early days of Miller’s college education, her head injuries and symptoms of post-traumatic stress disorder made learning difficult; she had trouble grasping some concepts and was anxious about tests.

It was a difficult time that was made more manageable by VR&E. The program paid for 100 percent of Miller’s education, provided her with a tutor, arranged for special testing accommodations, and bought her a computer—her first. To make ends meet while taking classes, Miller worked at a bank, a gas station, and in a work-study program through VR&E. Without a home of her own, she and her husband still had to find safe places to sleep each night, until they moved into their own home shortly before she graduated with her bachelor’s degree in 2001.

She eventually transferred her credits from Nassau Community College to Hofstra University, where she graduated with a bachelor’s degree in accounting in 2001.

What made a huge difference were VR&E counselors who believed in her and took pride in their work.

“I had one counselor who always followed up,” Miller said. “If he had to call me 500 times, he called me 500 times. If I asked him a question and he didn’t know the answer, he said, ‘Let me find out.’”

Today, Miller runs two organizations that she founded, based on the education VR&E helped her obtain. The first, John 14:2 Inc., helps Veterans who don’t have a strong support system. And she’s begun another program, Women Veterans Interactive, focused on helping female Veterans.

VR&E helped Miller gain the knowledge she needs to help make these organizations powerful. As Miller told VR&E, “A master’s degree in nonprofit organizations would help me to achieve my ultimate self-employment goal. I have been doing this work, serving Veterans. I can’t afford a master’s, but I need it.” She completed the paperwork and was approved. In fall 2012, Miller earned a master’s degree in nonprofit and association management from the University of Maryland.

“VR&E has helped me so much,” Miller said. It’s not just the schooling; the education has given her the confidence she needs to lead a nonprofit. “I’ve lived the life, but now I have the paper to back me up. As an African-American female, it’s hard to get people to take you seriously. When I told people I was two steps away from a master's, people went, 'OK, let me give her a second look.'"

Miller has benefited from multiple VR&E tracks, as well as other VA programs. "Once you get that help, it can elevate you to the next level."