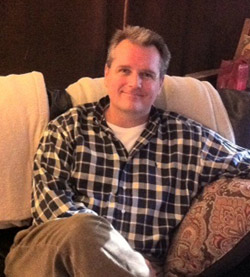 “VA was honest with me and I felt empowered. … I take care of myself better. It was a huge life change.”

“It’s the best place on the planet to go and be somebody else,” he said. Out of the Navy, feeling hopeless and alone, he had started drinking, getting into fights, bouncing from job to job, and wondering what was wrong with him.

“I wanted nothing to do with the military or Vet groups,” he said. “I was done. I wanted to be someone else. If someone asked if I was a Veteran, I denied it.”

Navy life was all Martin had known—he joined at age 17—and it had been his way out of a troubled childhood.

“I was abused. I just wanted to leave Chicago, and the Navy seemed like a pretty good way to get out of there.” Martin’s father was never a part of his life, and so his commanding officers had been his role models and his family.

Although his time in the military gave him a sense of belonging, the most fulfilling part of his life began decades later when Martin joined the Veteran Readiness and Employment (VR&E) program. With his counselor, he put the pieces of his life together so he could move forward.

He had head injuries from accidents during deployments to Panama and the Gulf. The details of his final injury are foggy—“I was aboard a ship and injured myself. … I don’t remember a lot about the circumstances”—but the repercussions severe enough that he sought and received a medical discharge.

Martin went back to school, but found coursework wasn’t as easy as before his military experience. With constant headaches, he couldn’t concentrate. Martin said, “I had to read something 10 times; I struggled with higher-level concepts. But it wasn’t like I wasn’t trying.” Despite falling into a depression, after several years he earned his bachelor’s degree in electrical engineering from Purdue University.

At age 41, Martin said, something clicked. By then he had a son: “I looked at myself and said, ‘This isn’t the way it was supposed to be.’ I was looking at [my son] and I didn’t want him to see me not try.” That’s the first time he went to get his records at VA. In all those years he had never gone through the process to receive compensation and pension. In finally doing so, Martin was given a 60 percent disability rating. A VA doctor said, “This isn’t going to go away. It’s for a lifetime.”

VA also guided him to VR&E. A counselor, whom Martin describes as “one of the greatest people,” helped him develop a plan and enroll in a graduate program at Indiana Wesleyan University. VR&E saw to it that Martin was granted classroom accommodations he was eligible for, including recording devices for lectures and extra time on tests. The program paid for his tuition, and provided him with a monthly stipend and a laptop.

Martin has a 3.75 GPA and will graduate with a Master of Business Administration next summer.

These days he devotes his time to helping his fellow Veterans through mentoring programs and volunteer work.

“I don’t want anyone to go through what I went through,” he said. “When I got out, I felt like there was nobody there to help me. Now, I want to be part of a community of Veterans saying ‘I know how you feel, I served in that sand, I know how horrible it is.’ But now you’re home and here are the great things you can do.”

Today, at 44, he doesn’t long to be anyone but himself—and he’s no longer running. He credits VA and VR&E with “bringing him back to reality.” Now, he says, he doesn’t feel so alone.

“I feel like I am part of a band of brothers, like someone is on my side,” Martin said.