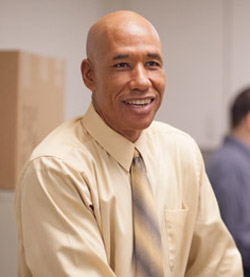 “The program is incredible. Veterans have got to take advantage of it.”

Dissatisfied with his maintenance job at a post office in Fort Lauderdale, Fla., 21-year-old Cal Foster joined the U.S. Army in 1978. A successful military career soon followed, including a stint with the prestigious Honor Guard, where he learned discipline. But what he calls “an incredible experience” didn’t come without hardships. Two years later, while serving at Fort Richardson in Alaska, Foster injured his lower back. He returned to his job with the U.S. Postal Service, but with little work experience that did not involve physical labor, Foster was left with few options.

“I didn’t have a college degree, nothing I could rely on,” he said.

But his years of service in fact did give Foster something to rely on: VA’s Veteran Readiness and Employment (VR&E) program sent him a letter, inviting him to participate in a briefing and personal career evaluation with a Vocational Rehabilitation Counselor. In 2000, Foster's disability rating had increased, which made him eligible for VR&E’s services. He took a leave of absence from the post office, moved to Washington, D.C., and took a job with the National Alliance of Postal and Federal Employees labor union. In 2001 he enrolled at Howard University, in business administration, with a focus on insurance. With VR&E’s help, his education was free.

His employer was understanding and made it possible for Foster to juggle both school and a job. But then his job ended, and to make ends meet he temporarily moved back to his former job with the post office in Fort Lauderdale, leaving his family in the District.

During this critical time, his Vocational Rehabilitation Counselor proved to be the biggest help. Foster said that he didn’t have the discipline to pursue the online classes he had enrolled in: “I had gotten so deep in financial trouble—I was trying to work two jobs and go to school online. My kids were young. So I gave up on education.”

Not so fast, said his counselor: “She called me every day,” Foster said. “She kept plugging away, trying to get me to understand what I had for benefits. I finally bought into her determination and fed off how committed she was to helping me do something I had almost given up on.” In 2009, his counselor reminded Foster that in two years his education benefits would expire (Veterans have 12 years starting at the time of separation to use benefits). With the help of an academic adviser and his VR&E counselor, Foster produced an ambitious plan to finish in exactly two years by taking three courses a semester.

“It was tough, but it was either now or never for me. I had to finish,” Foster said.

In December 2011, at the age of 55, a proud Foster graduated with a degree in acquisition and contract management. He’s now considering managerial positions with the U.S. Postal Service.

Of VR&E, he said, “The program has made a big difference in my life. Huge. Some people my age are looking to wind down. I am gearing up. It’s a whole different ballgame for me. I have the degree. I graduated with honors. I am geared for excellence.”

Despite his own success, Foster understands the extra challenges that some Veterans face.

“When you’re classified as being disabled … even if you have a chance to go back to school, you are still coping with all of the challenges that are part of that struggle for every Veteran,” he said.

Finances are another obstacle VR&E can help Veterans overcome. Foster realized how lucky he was after hearing his peers worry about how they would pay for books and classes.

It’s especially important for the message to reach younger Veterans.

“If they can take advantage of [the program] in the prime of their lives, in the moments where creating opportunities of greater income are available … it would be incredible,” Foster said.

His experience has convinced him that all a Veteran needs is determination.

“The system works if you utilize the tools,” he said. “The program is incredible. Veterans have got to take advantage of it.”